The projected estimates for development in this area are:  a maximum of 11,345 residential dwelling units  and
a maximum population of approximately 29,243
​
​ 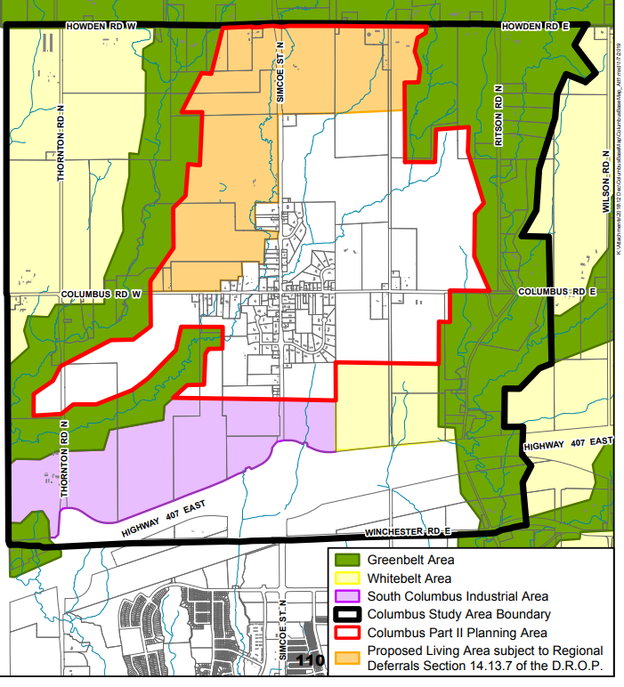 The Provincial Growth Plan, which was to preserve agricultural land, protect the environment, encourage growth and development to create complete communities and foster economic growth, ironically brought about the loss of the Columbus area prime agricultural land.

The plan involved projecting housing needs to for the next 25 years, with forecasts set originally to 2031..(the timeframe 10 years later was to 2041, but recently the outlook has been longer term, to 2051...

The Province required each Regional government to conduct within 5 years of the legislation, a comprehensive Official Plan review to conform with the Growth Plan.

However, the Province rejected ROPA 128 as it did not see the need for the Region to expand its northern urban boundary, especially in Oshawa from Hwy 407 all the way to Howden Rd. The matter went to the Ontario Municipal Board (OMB)

At the OMB in 2010 and 2011 the Province and Region's differences became complicated by the Province wanting to advance the long-planned model new community, Seaton, in the City of Pickering. As the many developers were aligned in pressing for the urban boundary expansion areas and they were already parties to an OMB appeal underway for the development of Seaton , the Province ended up declaring a Provincial Interest concerning Seaton.

This led to backroom ROPA Minutes of Settlement passed in 2012 by the developers, Region, Oshawa and Pickering, Whitby, Ajax and Clarington. When the Settlement Agreement was confirmed by the OMB in 2013 the Columbus area in red on the above map was redesignated from Agricultural and Hamlet to Urban residential and employment, except for the area outlined in orange on the above Attachment 1 to Report DS-19-04.

The developers went back to the OMB in 2017 to appeal the Deferral and were successful in 2019 having it also redesignated from Agricultural to Urban.


Several Reports and Studies can be found on the City of Oshawa's  Columbus Study page.
Below is an attempt to summarize the backstory and current situation.

The first comprehensive Report DS-19-04 contains the City's Agreement with the Developers (Attachment 6). Note it was signed by Oshawa Mayor John Henry September 11, 2018, when he was campaigning for Region of Durham Chair and just two weeks before his last Council meeting as Oshawa Mayor  before the Oct, 2019 municipal election. 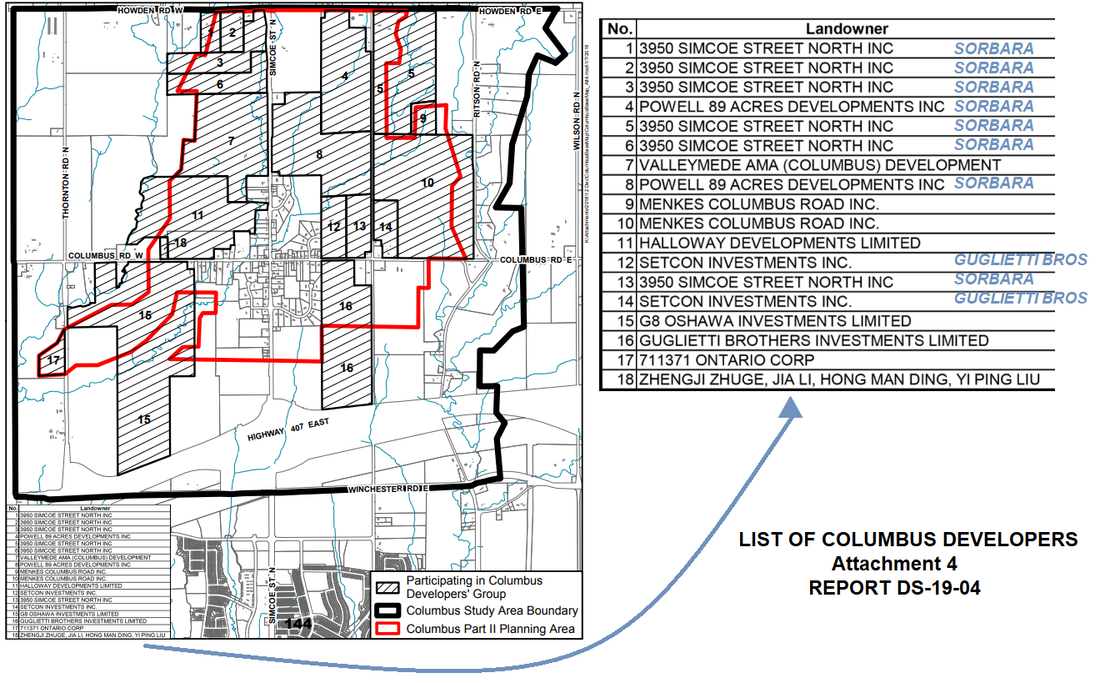 Below is a copy of Attachment 4, the Land Use and Road Plan in Report DS-21-155 with property lot lines overlaying the various proposed color coded land uses. The color code key:  dark orange is High Density housing;  lighter orange and cross-hatched gold are Medium Density;  yellow is Low Density, dark green is natural heritage/greenbelt/environmental protection,  bright green is for Parks; gray is for Storm Water Pond; the gray on white cross-hatch is the former Hamlet, which is a Special Policy Area.

Below is another copy of Attachment 4 with the color code key, but without the lot lines, and Attachment 5, the proposed expansion area on the west side of Ritson Rd., north of Hwy 407E.
​ 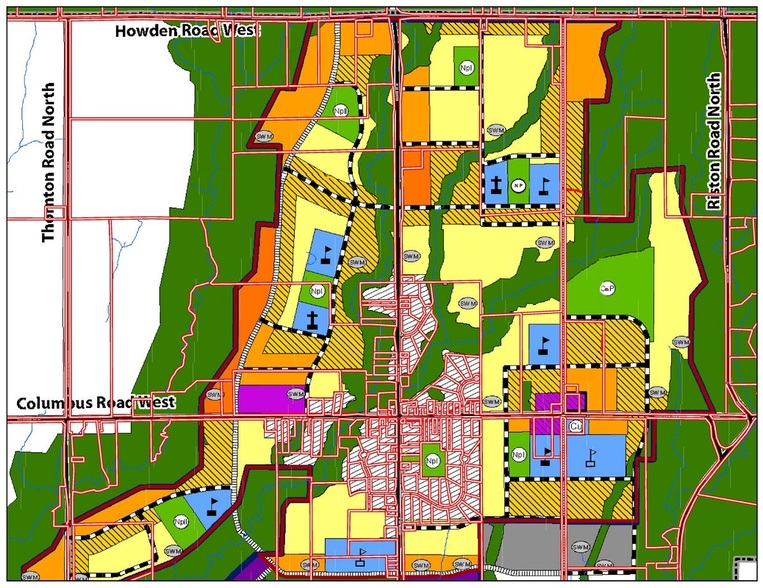 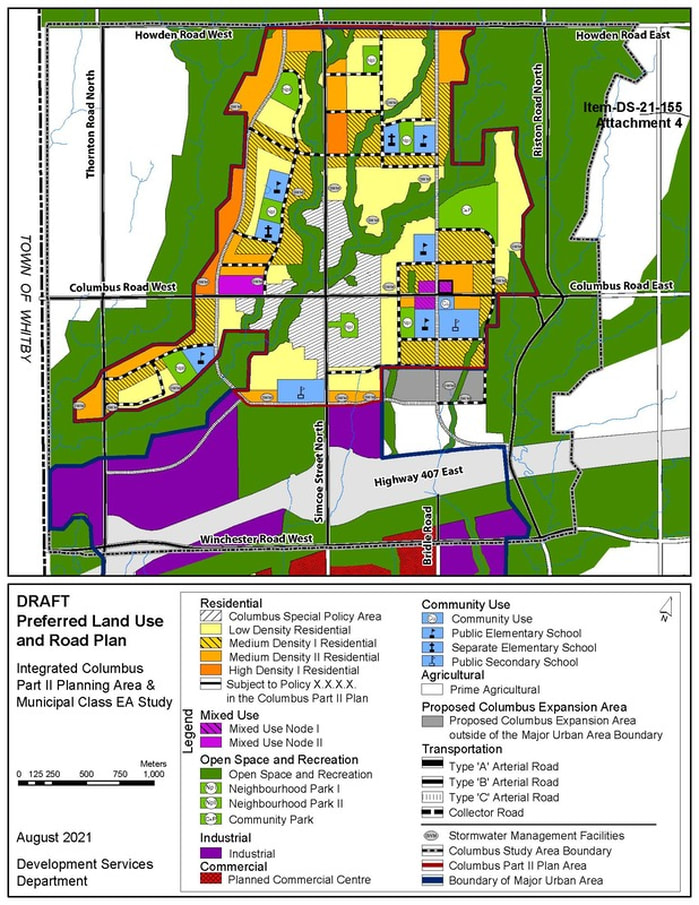 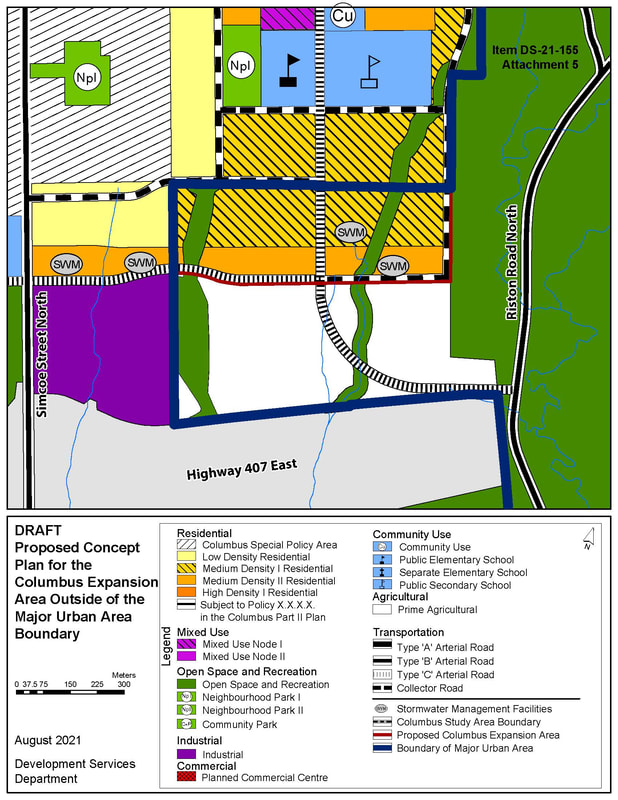 Columbus area residents have not had any meetings concerning the Columbus Study for 2 years.

A number of Oshawa residents wrote the City in September 2021 when Report DS-21-155 was published  to say a virtual meeting is not fair considering many Columbus residents have poor internet connections. They have asked for a live meeting now that COVID-19 room capacities have increased.  They also have commented how the developer landowners seem in a hurry to push their development plans through.

Long-time Columbus residents and area farmers are asking for more consideration given the impact on their historic community and agri-food operations.

Other concerns expressed are that in the past 2 years there have been many new residents move into the Columbus community unaware of the planning changes, and that the Columbus Advisory Committee is down to 2 from its original 5 members. The vacancies should be filled before the virtual public meeting is called for Thurs Oct 28 2021.


To answer who is driving this Part II Plan, and its tight timeline, good indication is found in the one page letter dated June 7, 2017 Bryce Jordon, General Manager of GHD, sent to Paul Ralph, Oshawa's Commissioner of Development Services at the time and now the City's CAO.
​
BRYCE JORDAN'S LETTER STATES:
"We are the consulting planners for a group of landowners in the Columbus Planning Area which we will refer to as the Columbus Landowner's Group (CLG). The landowner's in this group consist of:

Below are 2 other attachments to the 2017 Report: 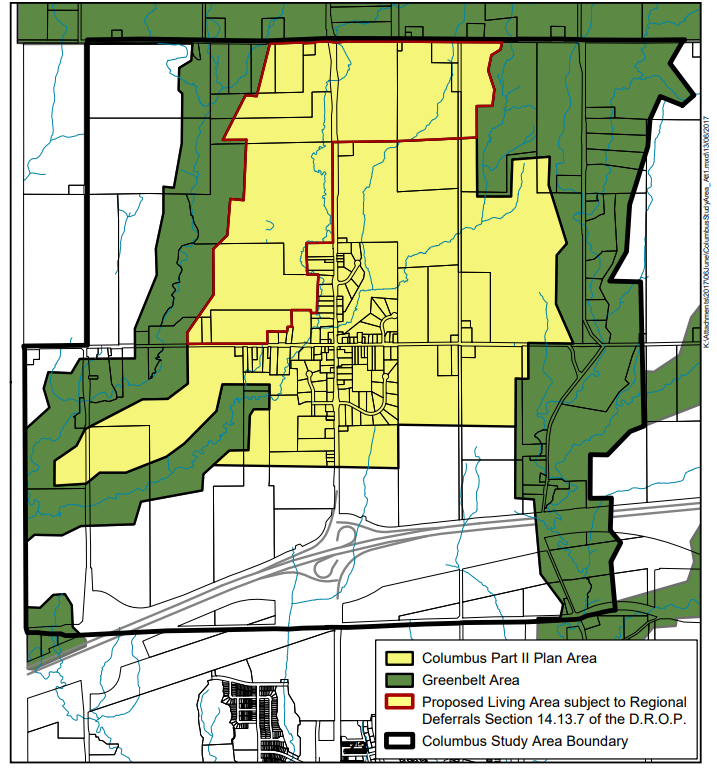 Attachment 1 to the 2017 Report  (showing outlined in RED the north and west sections of the Columbus area that the OMB did not approve to be taken out of the agricultural land base when the Columbus area was redesignated urban in 2013...the owners of these lands, the Sorbara Group and Halloway Holdings filed another appeal to have this section redesignated. The Ontario Land Planning Appeal Tribunal granted their appeal in 2018.) 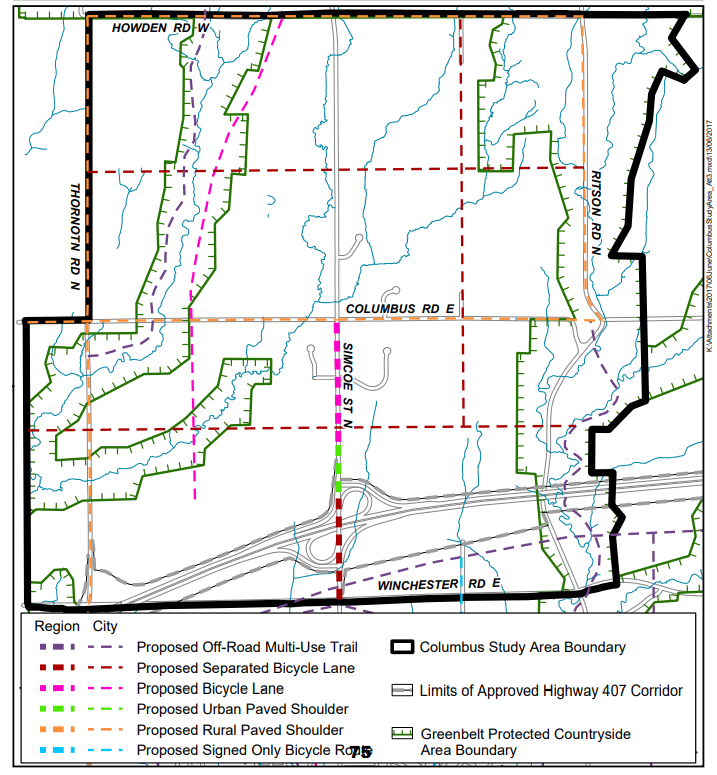 Attachment 3 to the 2017 Report  showing proposed trails, bicycle lane and off road multi use trail 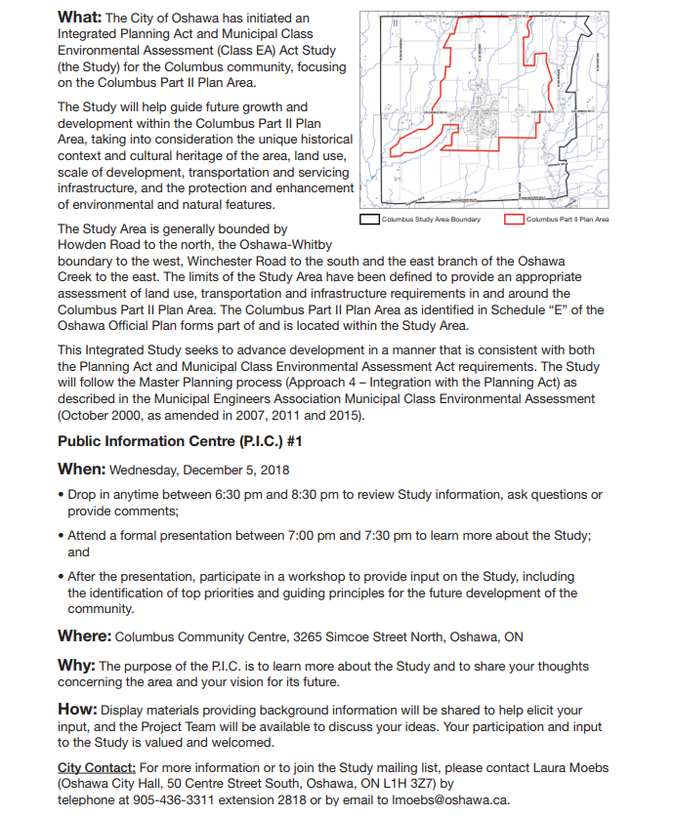 Note how City planning staff responded quickly to supporting the Mr. Jordan and the Developers, even copying the name of the Group.

However, clearly some developers didn't get the memo, because in Sept, 2021, among the several Oshawa residents letters of concern submitted when Report DS-21-155 was published for the Sept 13, 2021 Development Services Committee meeting there are four from developers who still refer to their Columbus Landowners Group. See the correspondence here: app.oshawa.ca/agendas/Development_Services/2021/09-13/ADDITIONAL_CORR_DS-21-178.pdf

One however, Delta Urban, combined the two names. Delta Urban's letter also indicates that the Group now has doubled from 5 members in 2017  to 10 in 2021.

Considering this particular letter, one can ask:

b) if the Developer Group members say they appreciate City staff efforts to continue to keep the Group members engaged; when in the same month local residents have written expressing concern they have not had any contact for two years, how can the process be balanced when Oshawa residents are finding left out?

Copied below is the passage in the Delta Urban letter that underscores the dichotomy:

"We are writing to you as the Group Manager on behalf of the Columbus Landowners (Developers) Group (the “Group”), which consists of landowners within the Columbus Part II Planning Area in the City of Oshawa.

The purpose of this letter is to:

Bryce Jordan  was a principle with the engineering and consulting firm G M Sernas (before it merged with GHD) and was involved with the Columbus developers at the OMB in 2011 and 2012, very much supporting the Region's Official Plan amendment expanding Oshawa's urban boundary to Howden Road and designating  all of the Columbus area from agricultural to urban and employment.

He has been  the planning manager with GHD since the merger and responsible for much of the coordinated planning with developers behind the  Kedron Part II  Planning Area north of Colin Rd. which Council approved in 2014 for an estimated buildout for more than 22,000 new residents.

The Kedron Part II development currently has heavy equipment installing the services and roads and likely some of its first homes may be constructed in 2022.

In 2017, before any of the actual Kedron Part II subdivision plans were approved  and before the north west deferred section of the Columbus area was approved by the Land Tribunal in 2018,  Bryce Jordan was in on the even larger project in Columbus,  forecast to have 29,000 new residents.

It seems Mr. Jordan, has very much been at the helm driving the Columbus Developers Group, dialoguing with City staff to advance this vast change to the City of Oshawa  northern rural landscape. Consider further:


7. The only members of Council in attendance at the PIC meetings in 2018 and 2019 were the Ward Councillors, John Neal and myself.

In addition to the 79 page Report DS-21-155, there is  the 142 page Columbus Master Transportation Study and the 67 page Columbus Urban Design Guidelines... and others

The first was to refer the report back to the Development Services Committee until the area residents were more informed.

When that failed, the second motion was to defer it until November.  Ward 3 Councillor Bob Chapman grabbed the opportunity to speak vigorously in favour of advancing the Developers plan in October. Commissioner Warren Munro spoke backing up this position. He articulated his plan was to have the Columbus Advisory Committee meet on October 5 for their input on the Reports and stated then the Public Information Meeting would follow at the end of October. (Note at this time Council was not apprised of the fact that 3 members of the Columbus Advisory Committee had left and only two remained.)


The day after the Council meeting, the October 5 Columbus Advisory Committee meeting was cancelled.  City Staff put out a notice to fill the 3 vacant positions on the Columbus Advisory Committee  for interested community members to apply by Oct 22, 2021  When Council approves the new members they will have a meeting after the end of October public meeting. This might seem perfunctory and out of sink with the Committee's terms of reference.

The same day Staff moved ahead to accommodate Mr. Jordan's original request for 'adherence to a tight timeframe' and issued a Notice for the  4th Public Information Centre virtual meeting to be held on Thurs. Oct 28, 2021 6:30pm -8:30 pm

To participate in the virtual meeting you must register by emailing Laura Moebs LMoebs@oshawa.ca