The upcoming Oshawa council term presents an exciting time with many new opportunities rebounding from the pandemic and celebrating Oshawa’s centennial. Although high inflation and high interest rates will  present challenges, a focus must be on inspiring and building confidence in Oshawa for its vital economic recovery.

Building stats continue to break records, but closer attention must be paid to balance new growth and its impact on existing communities. There is a clear need for better asset management so that redevelopment of existing infrastructure happens more regularly and in a less haphazard way.

While working to keep property taxes affordable, my constituents’ concerns continue to be my concerns. One of my first motions in 2019 was for an update to the Neighbourhood Traffic Management Plan. Oshawa has gone from one Community Safety Zone on a City local Road  in 2018 to four more all in Ward 1.

I take my job as the City Councillor representing the people and businesses in Oshawa's Ward One very seriously. I have a lot of energy, new ideas and believe in taking action. I dedicate my term in office to championing civic engagement because dynamic communities are key to the future betterment of Oshawa!

I will be working hard to see improved City parks and trails as the Pandemic highlighted the importance of quality outdoor spaces for people of all ages and abilities. Unfortunately a number of neighbourhood parks in Ward 1 are beyond their 'best before' date. Oshawa residents deserve public spaces that are accessible and enjoyable.

Ensuring constituents are well informed and their voices heard is key to determining City priorities and community needs. As I go door-to-door before this election please let me know your concerns, ideas, suggestions for change that you believe can help improve your community, Ward 1 and the City of Oshawa.

I look forward to everyone in Ward 1 getting to know me and having no hesitation reaching out to me for assistance on city issues. I want my constituents to know their concerns are my concerns.

First, some background. I am happily married, the mother of three, and have been an Oshawa businesswoman for more than 25 years.

After obtaining a B.A. from the University of Toronto I worked in a Toronto law office for a politically active Queen’s Counsel corporate lawyer. I then joined my mother in our family real estate business in Peterborough.  I credit my mother's keen interest in business and politics, compassion and assistance to family, neighbours and others facing life's struggles as my strongest source of inspiration and motivation.

In 1992 I moved to Oshawa with my husband. We still live in the same house, which is in Ward I, and besides raising our daughters here and operating my own real estate brokerage, I have been active in caring about the community where I live.
​
When I ran for election as Ward 1 City Councillor in 2018 and was successful, I was motivated to invigorate and give new direction to Oshawa City Council. This holds true in 2022 too!  I believe my career and community advocacy provided a solid understanding of citizen's concerns, especially those related to property taxes/zoning rules/business licenses and city by-laws. Also, my experience as a citizen delegation at many City and Region standing committees, advisory committees and council meetings provided me firsthand awareness of the need for politicians to listen with an open mind and be responsive to their constituents.

The past 4 years as the City Councillor for Ward 1 have been rewarding. Finding solutions to a number of my constituent's issues keeps me on my toes! and I am still committed to persevering with those issues that remain unresolved.

At my own cost I took some great upgrading courses with the Association of Municipal Clerks Treasurers of Ontario (AMCTO). These courses helped me with my role as a member of the City's Finance Committee, especially at Budget time. I also took the Kaizen Foundation Yellow Belt certification course for lean strategy development and continuous improvement, which I found provided good management t touch points for effective processes that increase efficiencies.
As said before in 2018, I feel fortunate to have familiarity with both rural and urban life. I grew up on a Peterborough dairy farm -yes, I was a 4H member; and for more than two decades I have worked with new home/resale buyers/tenants and ICI business owners. Oshawa's Ward 1 presents a unique blend of country and city, along with certain challenges I believe I am well equipped to deal with as a representative who is attuned to both worlds and can continue to serve as a bridge to both.

For more than a decade I worked to try and curb urban sprawl, represented by John Sewell, the former Mayor of Toronto. I repeat again what I said in 2018, that close attention needs to be paid to good planning for all Ward 1's new growth coming to the Kedron Part II development area north of Conlin Rd. and in the not-so-distant future coming to the Columbus Part II area north of Hwy 407; as well as the need to support our vital agricultural/agri-food businesses.

At the same time, our residents' 'sense of place', their enjoyment and appreciation of their City must be boosted by
resolving our property tax affordability problem; ensuring access to efficient and safe transportation; and expanding economic growth and civic engagement.

I have served on the Board of the local real estate association and coached kids' soccer teams during the years all three of my daughters played on the City of Oshawa park's league.

I have also volunteered at St. Vincent's Kitchen and worked to raise funds for Feed the Need in Durham. In 2011 I helped raise $10,000 with my successful  Council on a Diet fundraiser.​    ​

Below are details of some efforts I initiated as a private citizen to help improve the quality of life in Oshawa and Durham Region. I list them here as examples of my commitment to bring positive change for Oshawa with energy, ideas and action.
Early in the 2010 municipal election, with Oshawa's change from the ward to the at-large system, I organized three 'Positive Discussion' events for the public to meet the new candidates. I promoted these events as a way 'to generate new ideas, improve understanding and strengthen growth'.

​The first of these  debates was at Kedron Golf Course, the second at the Protection of the Mother of God Church on Ritson Road, and the third (a 'speed debate') at the former Isabella's Café, at 19 Simcoe Street South.  Of the twenty-two candidates who participated in these events, nineteen signed a 'Code of Campaign Conduct'  I drafted. 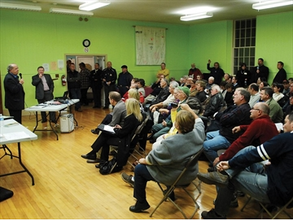 ​In October 2010, I organized a public meeting in Columbus for Oshawa's mayoral candidates and invited Region Chair Roger Anderson, and MPP Christine Elliott as guest speakers. The meeting's primary focus was to raise awareness of Oshawa residents' objection to the Highway 407E Phase One construction ending at Simcoe Street and the negative impact this would have not only on the historic Hamlet of Columbus, but also on Oshawa’s downtown and on Oshawa at large. 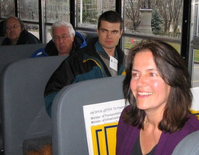 ​Subsequent to that meeting, I organized a bus rally to Queen's Park and met with the then Minister of  Transportation, Kathleen Wynne. After successfully pressing the then new Oshawa Council for a public meeting on the issue, in January 2011 I met with both Oshawa and Clarington Mayors to assist with planning that meeting. 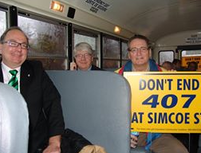 ​In 2012 I organized two rallies, plus a letter writing campaign to the City and  with others made delegations to Council to help save the George McLaughlin Craftsman style stone house on Simcoe St. N  (known as the Windfield Farm Foreman's House) from being demolished. Although the developer owner, Minto, proceeded with the demolition, to appease the citizens trying to preserve this historic Oshawa landmark  Minto gave the City  $150,000 for a heritage fund. 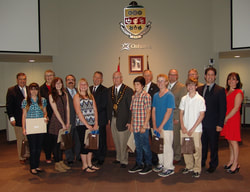 Local Look Back Essay Speech Competition Winners
​During the 2012 school year I directly approached the Public and Separate School Boards in Durham Region, as well as the Region of Durham Council and each of Durham's 8 municipal councils with an idea to raise awareness of local history, and at the same time involve young people in awareness of their local government.

I arranged this "Local Look Back Essay Speech Competition" for grades seven and eight students to research and write about the history of their school's name and present it in their local council chamber before Council members. The top student was awarded tickets to a 26-seat group Box for an Oshawa Generals game, as well as to the Canadian Automotive Museum on Simcoe St., and the Oshawa Museum at Lakeview Park. 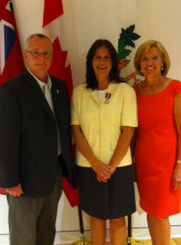 Queen's Diamond Jubilee Community Award 2012
Since first being described as 'something of an accidental activist’ in the local newspaper, to being honored with the Queen's Diamond Jubillee Award in 2012, I have continued to champion a variety of issues.

In the summer of 2014 with my ideas for much needed improvements to the city, I decided to take my efforts to the next level, and made the  decision to leave the real estate profession and enter as a candidate for the office of Oshawa Mayor. I saw this as a good opportunity to help strengthen Oshawa's communities and improve the City's finances. On election day out of the nine candidates I came in third, after Oshawa's incumbent Mayor was re-elected and Oshawa's former Mayor Gray came second. It was an experience I found uplifting, and one which helped me further recognize  problems Oshawa has that require close attention. 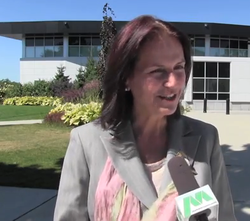 My vision is for City Council to have renewed vitality, openness, sterling ethics and improved civic engagement, with genuine respect and accountability to all Oshawa citizens.